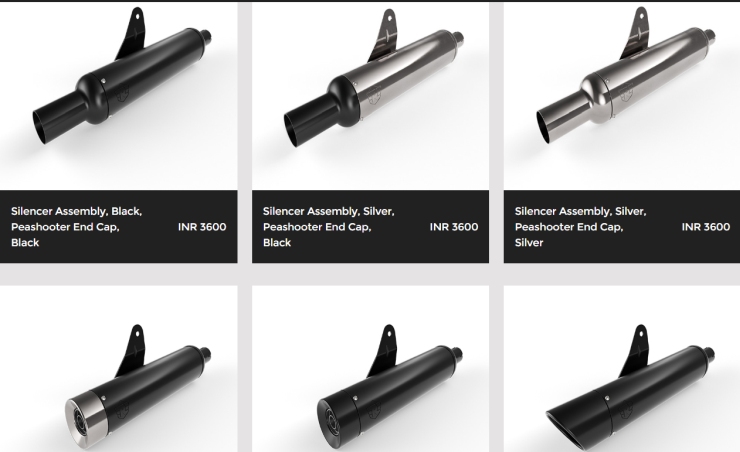 Royal Enfield is one of the popular two-wheeler manufacturer in the country. Their retro styled modern motorcycles have a cult following and some even modify these bikes to match personal preferences. Earlier, Royal Enfield had come up with customization options, where customers can purchase accessories like alloy wheels, panniers, engine guard, crash guard and other things from dealership itself. The retro motorcycle marker has now launched an official range of new silencers for Classic 350 retro motorcycles.

Royal Enfield has now listed a total of 16 new silencers for their Classic 350 series motorcycle. This comes as a relief to those who were not satisfied with the stock silencer and were not interested in going for loud aftermarket exhausts. These silences as hey are provided at the dealership level from Royal Enfield itself are completely legal.

The prices for the new silencers or exhaust launched by Royal Enfield starts at Rs 3,300 and goes up to Rs 3,600. They have listed all their new exhausts on the official website and the silencers are of three different styles. There are straight cut, slashed cut and tapered cut end cap. These silencers get both silver and black colour options. Even though these silencers can be ordered online, Royal Enfield will not deliver it to your address. If you want to buy one of these silencers, then you will have to order them online and select a dealership near your location. Once the order is placed, Royal Enfield will send it to the selected dealership and the buyer can get the silencer installed from the dealership. Royal Enfield has updated all there models and they are now compliant with the new BS6 emission norms.

The Classic 350 is one of the popular model from the brand. It is powered by a 346-cc, single cylinder, air cooled, fuel injected engine that generates 19.1 Bhp and 28 Nm of peak torque. The brand is now working on a new cruiser motorcycle Meteor that uses a new platform and engine. It was recently spotted testing with several accessories installed on it. Royal Enfield is likely to launch the Meteor cruiser later this year. The Meteor is expected to replace the Thunderbird. Also, the new engine platform seen on the Meteor is expected to filter down to Royal Enfield’s entire range of 350cc retro motorcycles.