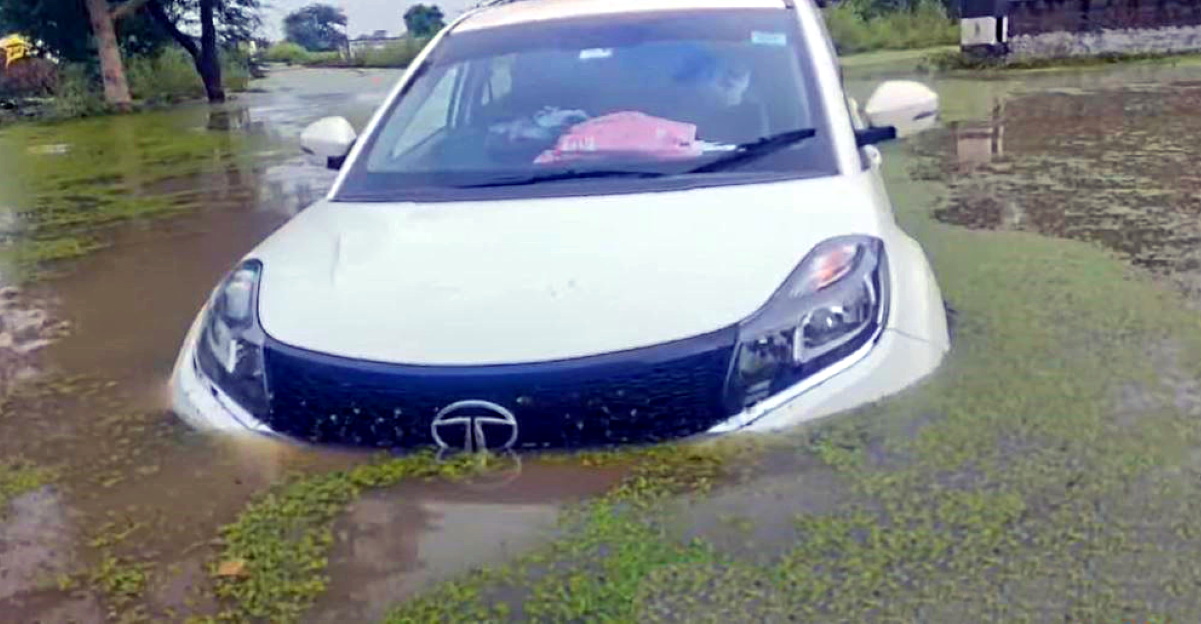 This year, many parts of India has seen an unusual amount of rainfall, causing disruptions all around. There are numerous videos of the cars getting stuck on the flooded roads from all over the country. Last year, a Mahinda Scorpio got stuck in a flooded underpass and the occupants passed away. Well, there are many people who drive around in sub-4m compact SUVs like Tata Nexon, Ford EcoSport, Hyundai Venue and Maruti Suzuki Vitara Brezza thinking that the vehicle is high enough to cross the roads. That may become true for many but if the water level is deep enough, they can get royally stuck just like the video below.

This video comes from Sonepat, Haryana where two people in a Tata Nexon are trying to cross a flooded road. This might be also one of the rare instances where the occupants have documented a car getting hydro locked from inside. The video shows show Tata Nexon getting deep into the flooded road and stopping in the middle of the road.

The video also shows the vehicle floor filled with water and even the slippers of the person recording the video floating around. The water level is quite high and even the seats are almost drowned.

On the outside, the water level almost reached the upper griller and only a few millimetres of the tyres can be seen. The Nexon was later rescued by a tractor and the person who recorded the video says the water level almost reached the tail lamps of the Nexon and it did not start at all. Trying to start a vehicle when it has stopped because of hydro locking is one of the most novice mistakes that we all do. Trying to start a vehicle in this condition may just kill the engine as water will definitely enter the combustion chamber.

At the end of the video, the car was being taken to the service centre but it will require a major overhaul to clean the engine properly and get all the water out. Since the vehicle was deep in the water, it is for sure that there is electrical damage too. If the water reaches the ECU, it can get short-circuited and conk off.

Repairing a vehicle damaged in this way requires a lot of money and time. While many insurances policies cover such damages, they may also deny the claim depending on the situation. This is why it is always a good idea to always be more careful during the rainy season and stay out of the flooded roads.