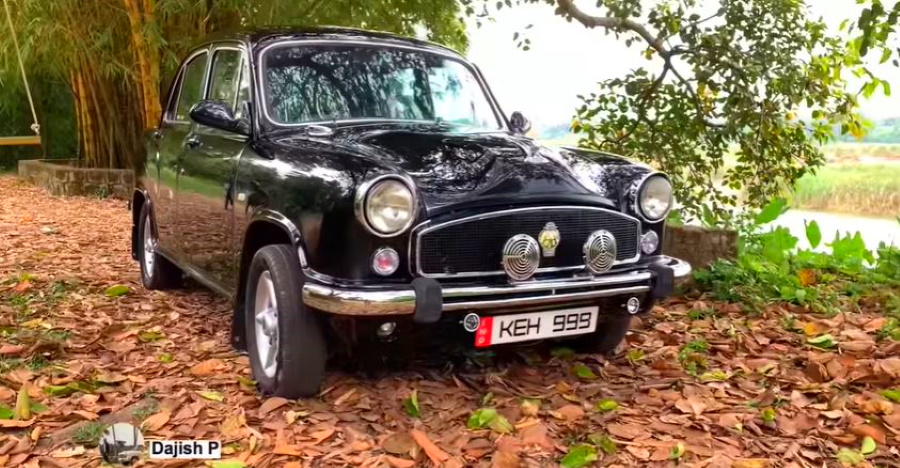 Hindustan Ambassador is one of the iconic cars that was sold in our country. Even though, Hindustan Motors has officially stopped production of the Ambassador, there are quite good number of well maintained examples in the country. It is currently a collectible item and beautifully modified and restored Ambassadors attract good prices as well. Here we have a video that shows a beautifully restored 35 year old Hindustan Motors Ambassador.

The video has been uploaded by Dajish P on his youtube channel. The resto-modded Ambassador seen in the video is a 1986 model and first impressions about it are that it looks great. It has been resto-modified in a way to make it more of a daily drive vehicle. Starting from the exterior, the owner completely stripped off the paint and repainted it with gloss black finish. The paint job on the car looks great and gives an elegant look to the car.

The current owner of this Ambassador has done several other modifications to the exterior. The steel rims have been replaced with 15 inch alloy wheels. The stock door handles have been replaced with Mahindra Scorpio units. The ORVMs are also borrowed from Alto 800 hatchback. Apart from that, the front mesh grille has been blacked out and it also gets an aftermarket fog lamp too. It still retains the chrome finished bumpers and the rear bumper also gets the parking sensors on it.

Moving inside, the car has been totally modified to make it more comfortable. The seats are borrowed from Skoda and the dashboard used in this vehicle is from Maruti Zen. The power steering unit is from Hyundai and so is the power window setup. The roof and upholstery on this car has all been redone and the car looks elegant both from the outside and inside.

In comparison to other Ambassadors, this one felt less noisy and the reason behind it is the engine itself. It now runs on a 2.0 litre diesel engine from Toyota that is paired with a 5-speed manual gearbox. Other elements like the filter has been taken from a Qualis and the radiator is a custom made unit with a fan from Tata Sumo. Overall, the car looks very neat both from outside and inside and even after so many modifications the Ambassador has not lost its charm.