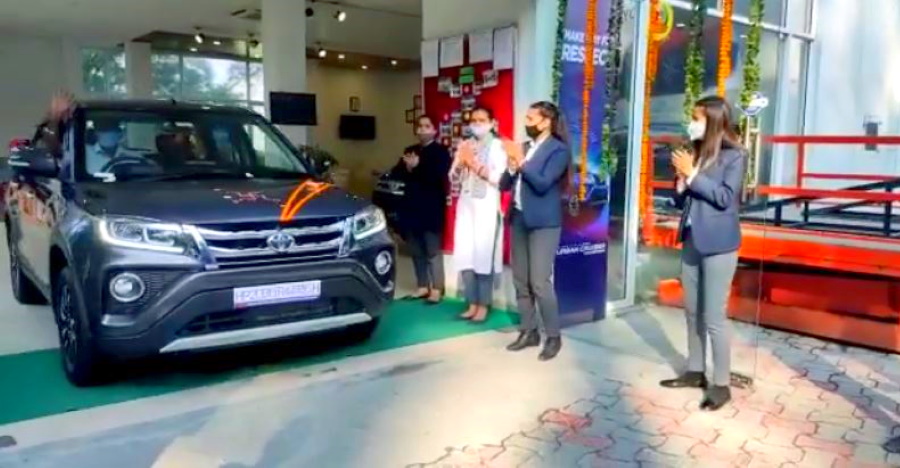 There are two videos that show the deliveries of the Urban Cruiser in two different colours. The first video is from Shimla, Himachal Pradesh where a black-coloured Urban Cruiser can be seen coming out of the showroom. The vehicle is being driven by the owner while the showroom officials welcome him.

The second video is from Sasaram, Bihar, where the employees of Budh Toyota can be seen in the video while delivering the keys of the Urban Cruiser to the family. The showroom had organised an event complete with cake cutting ceremony. The showroom officials handed over the keys to the kid.

The side profile of both vehicles remains very similar. The Urban Cross gets different looking alloy wheels. The rear also almost remains the same except for the bumper, which is different in both the vehicles.

Just like the Maruti Suzuki Vitara Brezza, the Urban Cruiser gets an identical dashboard, steering wheel, instrument cluster, infotainment system and even the seats. The only difference between the two is the colours. The Toyota offers a walnut brown cabin unlike the all-black option of the Vitara Brezza.

Just like the Maruti Suzuki Vitara Brezza, the Urban Cruiser will come powered by a single-engine option. There will be K-Series 1.5-litre four-cylinder petrol engine available with the all-new Urban Cruiser. It will generate a similar 105 PS of maximum power and 138 Nm of peak torque. It will get SHVS Smart Hybrid system that will come with Integrated Generator System with the four-speed automatic variants. However, the manual variants will be offered without the SHVS Smart Hybrid system. This will be similar to the Vitara Brezza.